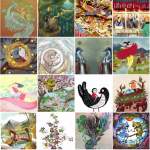 Last year, as part of the festivities for NBDCS' literary festival for children's books, the Asian Festival of Children's Content, we brought back our popular online illustration contest, the afccSKETCH, to encourage both budding and established illustrators from around the world to submit creative and… Details

Love to illustrate? Here’s a BIG opportunity to showcase your work [17 Jan 2017]

Often, a picture relates to the reader first, before the words do. The Book Illustrators Gallery, also known as BIG, is a yearly illustration exhibition that takes place as part of NBDCS' annual Asian Festival of Children’s Content (AFCC). Many visitors, we're told, have been drawn to the creative… Details

Did you know that The Book Council is filled with people with varied talents and interests? For example, Judi likes creating poems and repurposing old bags, Adan enjoys writing and reading heaps of comics, and Mabel likes editing (hehe… I'm leaving her to edit this post). As for me, I enjoy illustrating.… Details 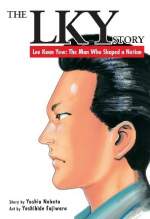 Speech by Mr R Ramachandran, Guest of Honour during the launch of Lee Kuan Yew: The Man Who Shaped the Nation 25 Oct 2016, 7.00pm| Books Kinokuniya, Ngee Ann City, Singapore Kajiya-san, MD Shogakukan Asia, the author Nabeta-san, the Illustrator Fujiwara-san, and friends, a very good evening to all of you. I must… Details

The Asian Festival of Children's Content (AFCC) Board of Advisors recently took a trip to Tokyo, Japan, to meet with various friends and partners who will be appearing and helping out at AFCC 2016. They toured the city and its suburbs and solidified plans for the event. During an AFCC Get-Together at the Tokyo… Details 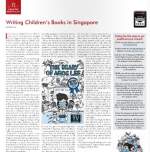 Adeline Foo, one of Singapore's best-selling writers of fiction for young readers, shares her thoughts on how the children's book scene in Singapore has evolved since 2006. Read all about it in the February 2015 issue of the Singapore American newspaper, published by the American Association of Singapore. Details

The 2014 Asian Festival of Children's Content may be over, but there are a bevy of blogs, testimonials, and photographs still to be read, consumed, and enjoyed! We've trawled the interwebs to bring you some AFCC 2014 experiences and recollections from speakers, delegates, bloggers, students, volunteers, and… Details

If you weren't able to make it to the AFCC 2014 Press Conference last Thursday, have no fear! We took a lot of photographs! It'll be like you were right there! Enjoy! ​ Details

At this year's first of three Duelling Illustrators events, children's book illustrators James "The Mayhem" Mayhew and "Devastating" Dave Liew will draw scenes from an unpublished children's book manuscript at the same time while everybody else watches them! We asked the two artists… Details