Dear friends, We hope that you and your loved ones have been keeping well in body and mind. As we settle into Phase 2 of the circuit breaker and figure out the path forward, we would like to take this opportunity to thank you for your support during the past few months. If you have been attending our online… Details

I have been with the Book Council for nearly three years, and have been running the awards programmes since then. It’s been a pretty wild ride, especially in my first year when I was thrown in the deep end and made to run the newly-expanded Singapore Literature Prize as soon as I joined. “Awards… Details 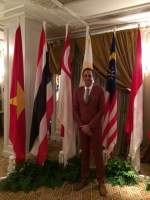 2014 SEA Write Award winner Haresh Sharma wrote a short piece on his experiences in Bangkok during the SEA Write Award Week. In case you don't know, Mr Sharma is the Resident Playwright of The Necessary Stage, and he has written over 100 plays, many of which have been staged internationally at cities such as… Details