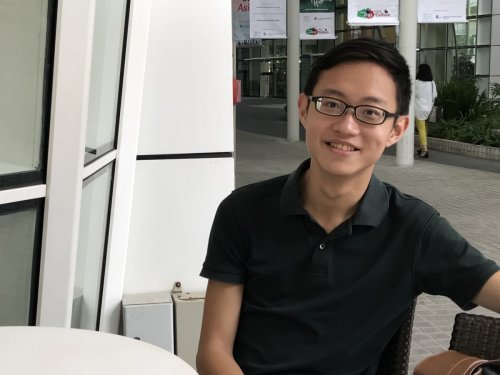 Poet Theophilus Kwek grew up in a family of doctors but prefers to give back to the community via his writing. (Photo credit: Raine Koh)

Theophilus Kwek has come a long way from when he first discovered his passion for writing. He laughs as he recalls how it all began. “I got home from school and I found my mum using Baygon on an ant trail,” sparking inspiration for a story about a nest of ants that overthrew the owners of the house. His mother was not amused then but she must be proud now of what her son has achieved in a relatively short time.

“It was when I went for a Creative Arts Programme in Secondary 3 that I realised that there were people who looked like me and sounded like me, who call themselves writers.”

Theophilus was mentored by poets Alvin Pang and Aaron Maniam. They played a huge part in shaping him, not just in his writing, but also in teaching him important values like humility and sensitivity. In fact, when his first collection was published, he was dubbed the “younger Aaron Maniam”.

At just 24, Theophilus has already been shortlisted twice for the prestigious Singapore Literature Prize, most recently for Giving Ground.

Arts in a Family of Doctors

Both of Theophilus’ parents are medical practitioners – his mother is a palliative care doctor and his father is a psychiatrist. Though they are trained in the sciences, Theophilus’ artistic abilities were no doubt inherited from his multi-talented parents. His mother paints, plays the piano, and enjoys baking, while his father does calligraphy and wrote when he was younger.

Growing up in a family of doctors, becoming an author was not part of the initial plan. His parents were hoping for him to pursue a career in medicine too. Although that did not materialise, Theophilus explains that his parents recognise there are different ways that one can give back to the community, and they are happy as long as he is doing something that can help others.

His parents have had much influence on the person that he is today. Although they are doctors, they are both keenly involved in the human stories behind their jobs. For them, it’s never just going in to “cut up that person” or “fix that bone,” says Theophilus. People are always the priority for his parents and that’s his priority now too.

Giving Voice to the Unheard

Grateful for all the opportunities and kindness that have come his way from the arts industry, Theophilus hopes to be able to pay it forward and continue writing for the causes he believes in. He cares deeply for issues concerning human rights, migrant crises and social justice.

Theophilus counts himself lucky to have had the privilege of being part of the writing community in the UK for the four years he was studying in Oxford University. He served as the editor of two different journals – Oxford Poetry and The Kindling. He seized the opportunity to spotlight the works of the underprivileged and the non-white writers that normally would not get an airing.

“A big part of writing for me is about building community,” he stresses, “supporting voices that wouldn’t usually get heard”.

< Newer: A PICTURE THAT WAS WORTH A THOUSAND WORDS

> Older: THE MAKINGS OF A SINGAPOREAN WRITER