THE MAKINGS OF A SINGAPOREAN WRITER Tan Hwee Hwee’s novels have brought her accolades but fiction writing is on hold for now because she says the process make her feel so lonely. (Photo credit: Hidayah Iskandar)

Novelist, journalist, editor, copywriter. As someone who describes herself as a “voice-driven” writer, 44-year-old Tan Hwee Hwee has honed her craft through several genres. But finding her true voice has not been an easy path for Tan.

She released her first book at the tender age of 22. What started off as a compilation of short stories manifested itself into her debut novel. Foreign Bodies received glowing reviews. Her second book was published four years later to similar success. Mammon Inc won her the prestigious Singapore Literature Prize in 2004. Just a year before that, she’d been a recipient of the National Arts Council’s Young Artist Award.

Despite being feted by the local literary scene, Tan’s take on Singapore authors hasn’t always been positive. In 2001, she made a comment about how “pathetic” local writers were. Tan was disappointed how some who had not published anything in ten years still considered themselves writers. Today though Tan’s views have become mellower.

“Over the past years, there have been a lot of Singaporean writers who have published overseas,” she says.

Tan says she now tries to provide a support system for fellow Singapore authors. She gives the example of connecting Lau Siew Mei, who she describes as one of the best writers she has ever known, with Epigram to publish her second novel.

Tan’s own growth as a writer was shaped abroad. From Australia to England to the United States, she took the experiences she gathered travelling and living in one continent to another and told the stories of the places and people she met in her books.

The diverse spread of people and culture in New York, in particular, brought a sense of identity and acceptance for Tan and she finally felt like she fit in. She says she had grown up a misfit in Singapore. She couldn’t conform to the formalities here and she was always judged by her peers for it. Singapore, Tan says, “lacked inspiration” and she knew surviving as a writer here would not have been sustainable at that time. However she did eventually move back to Singapore and began her venture into the publication scene.

Although Tan’s works in fiction have brought her accolades, that genre of writing is on halt for now.

“I was feeling very miserable because I was so lonely all the time,” she says. But there’s still another book lurking within her.

“I still dream of writing a novel,” she says, “But I think I’ll probably do a memoir first, then a novel.” 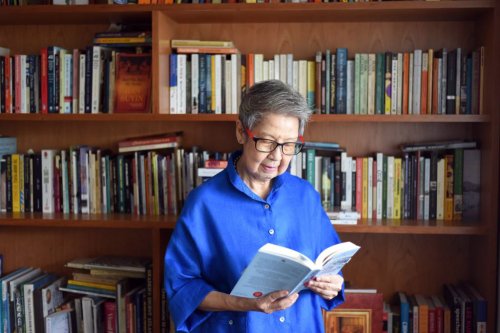 Award-winning author Suchen Christine Lim believes that the key to encouraging Singaporeans to pick up a Singapore novel lies in giving them the opportunity to listen to the author’s reading of her work.

“It is a matter of discovery and listening to the voice reading the work to you,” Suchen declares.

She recounts reading an excerpt from her book, The Lies that Build a Marriage, in a secondary school. To her shock, the students revealed it was the first time someone had read to them. After her session, many students expressed interest in her books and even started buying them.

Though Singapore literature may not be everyone’s cup of tea, Suchen believes that book readings help expose people to different kinds of writing, and grow an authentic readership slowly.

But if you think Singaporeans today don’t read, Suchen recalls it being worse 25 years ago when local authors were less recognised. Then in 1992  the Singapore Literature Prize was created, and

She describes it as a “wonderful honour,” saying it was the first time a book of fiction was recognised here with a big prize.

“I think it made everybody sit up and really look at Singapore writing.”

She does readings of the novel at festivals and new readers from abroad tell her how relevant it is even today.

At 70, Suchen’s writing journey continues. Although she is more well-known for her novels, she has also written many children’s stories which have been adopted into the primary schools’ reading programme.

She believes there are many roles for writers.

She says writers do not start writing by thinking about the message they wish to convey. Instead, “the artist goes to the edge” and creates imaginary worlds for readers to live through vicariously.

She finds love interesting to write about as it is a universal feeling. This is evident in The River’s Song, where she weaves a love story into the history of the Singapore River and the people who were evicted from its banks during the great clean-up of the river.

However, she has also explored other genres. Her first detective story Mei Kwei, I Love You was published in 2014. The story was final-listed in the short fiction category of The Private Eye Writers of America SHAMUS Award 2015 the following year, which recognises the best in the detective fiction genre.

Like all her other stories, it was set in Singapore. Suchen believes more voices are needed to tell even more stories about the country.

“If our writers do not write about ourselves, about where we are and who we are and hold up a mirror to our society, who will do it?”

BREAKING AWAY FROM EMILY

Diploma in Creative Writing for Television and New Media Stella Kon, 74, prepares to set the stage alight one last time, before passing the pen onto the new generation. (Photo Credit: Caitlin Ong)

From Malaysia to Scotland, Hawaii to Singapore, Stella Kon’s one-woman play, Emily of Emerald Hill, has wowed audiences worldwide since its first performance in 1984.

Emily won the 1983 Singapore National Playwriting Competition. But even with a major Singaporean cultural piece under her belt, the pioneer in the Singapore literary scene still feels unfulfilled.

“I’ve been writing ever since then [Emily] and I feel unnoticed,” the 74-year-old admits. “I feel unrecognised. You know, it’s like a one-shot wonder, way back when? And I meet people that say [to me], ‘Stella Kon ah? Your Emily, you’re still alive ah?’”

Stella has a long list of works, including plays, short stories, poems, novels and musicals under her belt. Among her awards is the 1994 Singapore Literature Merit Prize for her novel Eston.

However, she says none of her writings has attained the same level of acknowledgement as Emily.

“I kept on working and it didn’t hit the public eye at all,” says Stella.

But, her upcoming work may soon change that.

“I am in the final stages of completing Lim Boon Keng: The Musical,” she confirms with a smile.

It is a busy time for her with the musical expected to be produced in October 2019.

It’s been in the works, “on-and-off for 20 years” because she could not get the format right. Based on the life of Dr. Lim Boon Keng, a national icon and Stella’s great-grandfather, the play carries her hope that it will be the breakthrough she has been waiting for. But she knows better than anyone, that the theatre audience is anything but predictable.

“And then they [the public] would look at Lim Boon Keng,” she muses, “and then they would say, ‘after all these years this is the best you can do?’”

With the pressures of writing constantly, there is only so much a person can take.

“Tired la. Very tired. My health is also fading… I have to ration myself more.”

But even with plans to lay down her pen, Stella continues to explore different ways to tell her stories.

An avid fan of sci-fi, Stella has always been curious about “what a future with technology would become”.

“At first, I wanted [Lim Boon Keng] to be like a ‘TED Talk’,” Stella shares, “with lots of stuff on the screen, but it didn’t work out”.

She explains that “absorbing all that information” would distract the audience from the performance onstage, and make it become “just another multimedia show”.

But Stella says she looks forward to seeing how the new generation of writers integrate technology in their work.

And she believes that the challenge will not be about what kind of technology is utilised, but rather how it is used.

“It’s a question writers must ask themselves,” she says, “what can you do to produce works of art in the media that will thrill, touch, move and research deeply into the human condition without the resources of an entire film studio behind you?”