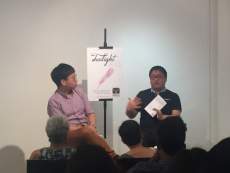 We kickstarted the first session of Twilight Tales this year with Desmond Kon Zhicheng-Mingdé, author of an epistolary novel, two hybrid works, and seven poetry collections! A former journalist, he has edited more than fifteen books and co-produced three audio books. Among several other accolades, Desmond is the recipient of the IBPA Benjamin Franklin Award, Independent Publisher Book Award, Poetry World Cup,  and the Singapore Literature Prize. He also helms Squircle Line Press as its founding editor.

Held on 25 February, the session was moderated by poet and critic Daryl Lim Wei Jie, and organised as part of the inaugural #BuySingLit movement.

That evening, the audience was treated to an intellectually stimulating session where Desmond and Daryl spoke about their educational backgrounds and the influences in their writing. Desmond also touched on his foray into prose and poetry, and shared anecdotal stories behind several of his works.

A big shout-out to The Fabulous Baker Boy for hosting the event at their lovely space.